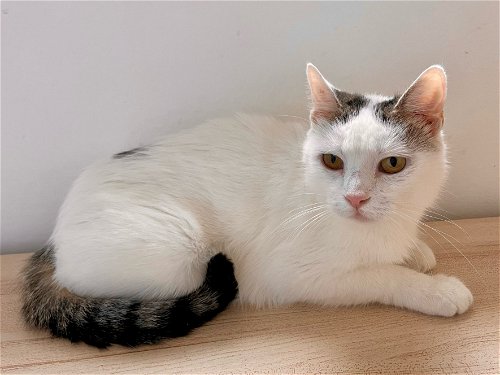 Sibyl, Salene and Shea came to us two days after we had taken in Sera, Seal, Sachet, Saga and Sherlock.  They were in a home with 10 other cats all of which Sibyl was the mother.  The family was no longer able to care for them and the home was being sold.   The family was trying to get help from another rescue and thought they had found placement for the them and we really did not have room for more then the first ones we took in as we had already taken in several other cats in our foster homes.  We found out two days later that they had not had a place for three of them.  A family member was going to dumped them. We were pretty full but one of our foster homes made room for them.  It turned out to be Sibyl, who is their mother and   and also the mother of Sachet, Saga and Sherlock.  All of the cats are so sweet and gently and it is obvious they had receive a lot of love.  They all look very much alike as they are mostly white with tiger spots.  She is a little shy at first but sweet once she warms up to you. She is a very easy going girl. She is FIV/Leukemia negative, current on vaccines, flea and worm treated and microchip.  Her approx. DOB is  6/1/2019.

Good with Cats, Good with Kids